The PA 090 automatic packing machine is a device used to pack tight long elements such as skirting-boards, floor panels in shrink film unwound from one roll. Elements are closed tight by a transverse sealing bar and a linear sealing bar. A change in the section of the package involves changing a film bending device and a film roll.

Elements to be packed are placed lengthwise by hand (or come on the line) on a conveyor which moves an element to a film bending device. The conveyor moves the packed elements through the film bending device where the package is wrapped in film unwound from a roll driven by a film unwinding mechanism. A film sleeve formed around the package is closed from the bottom by a longitudinal sealing bar when the packed element is moved. The film is closed in the front of and at the back of the package by a transverse sealer. While the element is wrapped in the film it is additionally pressed to an infeed conveyor by means of clamps. When the package is wrapped in the film it is carried by a plate conveyor, for example,TP 6000 to a heating chamber of a tunnel. However, the film is shrunk on the package in a cooperating device, i.e. in a heat shrink tunnel, for example, TGW 30/50 which finally forms the package.

The packing machine is equipped with a system of automatic unwinding of film, a longitudinal sealing bar and a transverse sealing bar, temperature control of sealers and speed control of conveyors. 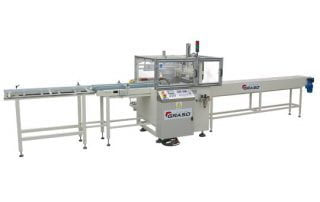 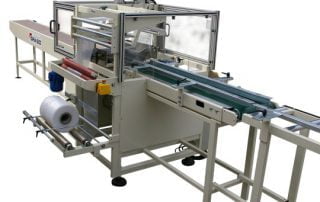 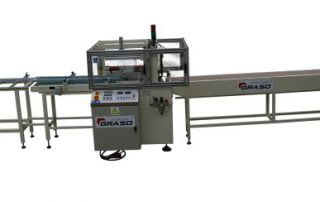 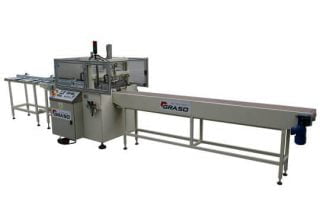